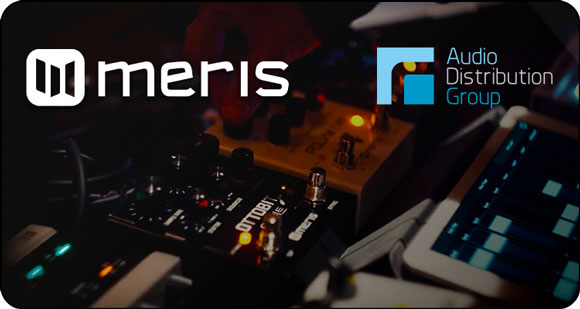 Based in Los Angeles, Meris is an exciting company established by Terry Burton, the hardware and software engineer who previously founded guitar effects company Strymon in 2008. Also forming part of the Meris family are Angelo Mazzocco, previously Line 6’s top choice DSP Engineer to the stars (Dweezil Zappa, The Edge and Van Halen to name but a few) and Creative Director Jinna Kim hailing from L.A.’s leading design studios and who previously created the brand identity for Strymon.

Audio Distribution Group has been distributing the brand in a number of European territories since the end of 2017, including throughout Scandinavia and Italy. However, we are extremely pleased to announce our increased partnership with Meris as their new UK Distribution partner from September 1st 2018.

Meris Founder, Terry Burton commented “ADG has done an impressive job of ramping up our brand for Italy and Scandinavia in a very short period of time. We have full confidence and we’re grateful to have their support growing Meris throughout the UK“.

Bruce Davidson, ADG COO added: “We have been working with the great team at Meris for some time now and are looking forward to help nurture the brand to grow in the UK, which is one of the most important European markets for effects and studio equipment. All of the Meris products are game changers in their own fields and as even more new and innovative products are developed, some being released very shortly actually, we’re really looking forward to now be a bigger part of the brand’s journey in the years to come.”