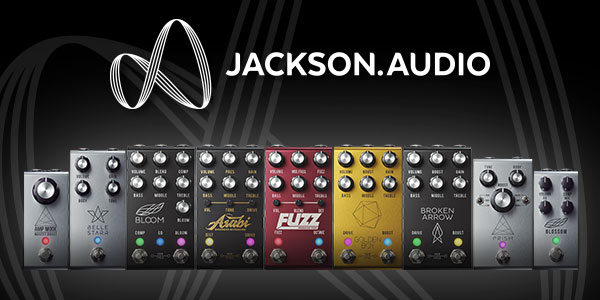 with versatile and digital control

Founded in 2016 by Brad Jackson and Juan Kyle of Jackson Ampworks and guitarist Nigel Hendroff, Jackson Audio sees over 40 years of collective sonic experience manifest itself into a range of stunning guitar pedals.

Packing a vast array of sounds within their beautiful and compact steel enclosures, several of these designs even feature some of the most cutting-edge digital control on the market, giving not only unparalleled sound quality, but enabling musicians to bring all kinds of sonic landscapes to their rigs.

Jackson Audio have always strived to make their pedals as versatile as possible, while at the same time retaining a super intuitive and fun user experience. This was apparent from the get-go with their tone-sculpting gem, the PRISM which, with its extremely beautiful pre-amp and flexible EQ options, will make any rig sing the second you turn it on.

Versatility and controllability only became a more obvious company ethos with the release of their BLOOM Compressor/EQ, BROKEN ARROW Overdrive and GOLDEN BOY Overdrive, each of which fuse divine analog tones with precise digital control, selectable clipping options, gain cycling and full MIDI control. Add in the ASABI, developed with Mateus Asato (undoubtedly one of the predominant guitar voices of today) and you have one of the most versatile platforms for drive tones ever created.

Their latest outing, developed with Cory Wong (one of the foremost guitar players of today), THE OPTIMIST combines the famed, mythical circuitry and sought-after parts of the Klon-style Overdrive with the transparency of a Timmy-based circuit and enhance this duo with a versatile 3-band EQ for yet another versatile drive platform with it’s own special flavour.

The FUZZ Modular Fuzz, the overall tone can be completely customised with analog plug-ins, turning the pedal into a whole new device with separately available, affordable and easily swappable plug-in daughterboards.

These killer effects fit perfectly into any modern-day rig, be it simple grab-and-go fly-boards or elaborate MIDI-controlled sonic spaceships, it’s all there! 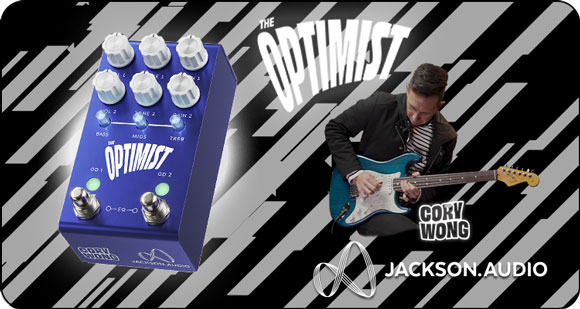 January 25, 2022
Developed in collaboration with Cory Wong (Vulfpeck, Fearless Flyers) THE OPTIMIST - MIDI-controllable Dual Overdrive and EQ offers an updated take on the mythical Klon circuit, fusing it with an independent Timmy-style circuit and combing both with Jackson Audio’s MIDI control capabilities and a Baxandall-inspired 3-band EQ section ...
Read More

For every dirt pedal on the market, there are ten “wouldn’t it be great, if…” questions.

This is where Jackson Audio’s ethos of combining classic sounds and features with modern-day control technology and accessibility comes to the fore.

From the iconic BROKEN ARROW, which gives all the TS-style saturation with as much, or as little mid hump as you like, to the GOLDEN BOY, Jackson’s interpretation of the Bluesbreaker/King of Tone style circuit (developed in collaboration with Canadian alt-country star Joey Landreth) and right through to the BELLE STAR, that provides the sound of a wide-open super small low-wattage amp in a small box, none of Jackson Audio’s pedals can be considered mere clones of what is already on the market.

Add in Gain Cycling, the company’s most unique feature that adds hands free gain adjustment in 4 easy steps, and you can instantly dial in Rhythm, Chorus, Lead, and Solo gain with just the tap of a foot.

For the ASABI,  Jackson had a two-year development process with renowned guitarist of today Mateus Asato. Every detail in this essentially complete  ‘Marshall in a box’ device was painstakingly refined to ensure that both the Distortion and Overdrive channels would work together, to perfectly recreate the soulful overdrive and the liquid high-gain tones that this legendary guitarist is known for.

Now Jackson Audio proudly collaborates with Cory Wong, one of the foremost guitar players of today, to bring you THE OPTIMIST. An updated take on the mythical Klon circuit, probably the most celebrated and sought-after drive pedals of all time, while at the same time fusing it with an independent Timmy-style circuit. The Optimist also adds Jackson Audio’s MIDI control and a killer 3 band EQ section, which makes the pedal a single product for creating some of the finest and inspiring lead and rhythm tones today.

In addition, just like with the BLOOM, all features of THE OPTIMIST, BROKEN ARROW, GOLDEN BOY and ASABI are also MIDI controllable.

Working in collaboration with touring and recording artists on all their pedals, Jackson seeks to give the players exactly what they crave. 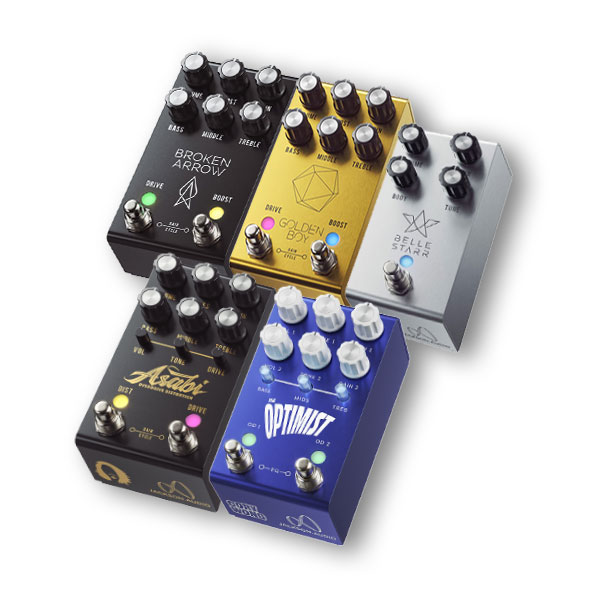 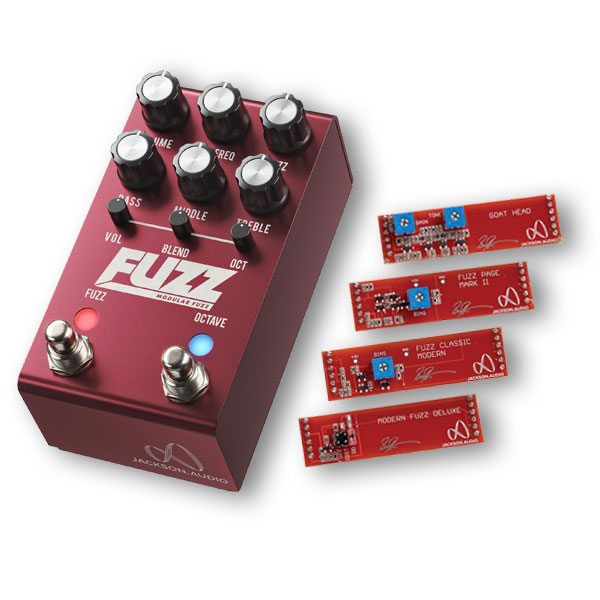 Jackson Audio’s FUZZ Modular Fuzz takes faithful recreations of historic fuzz circuits and brings them together in one modular pedal that allows you to create classic fuzz sounds, as well as exciting new tones normally impossible with just the original circuits!

In addition to the two modules supplied with the pedal, FUZZ is complemented by a growing range of easily-installed plug-in Replacement Fuzz Modules. The first four (MODERN FUZZ DELUXE, FUZZ CLASSIC/MODERN, FUZZ PAGE MARK II and GOAT HEAD) are faithful and completely analog recreations of historic and sought-after Fuzz circuits, which are drop-in replacements for the pedal’s stock circuit.

Coupled with the outstanding switchable octave and 3-band EQ circuits, The FUZZ and the line of optional Fuzz Modules are the one stop shop for Fuzz aficionados.

The cornerstone of Jackson Audio’s pedal offering definitely lies within the field of compression, with a comprehensive dynamic engine that is designed to give guitarists maximum dynamic tonal control in ways never before possible.

For those who just need the essentials, the BLOSSOM is a finely distilled, concentrated version of the Bloom’s most core features, which makes Jackson’s highly praised take on compression more accessible to players of all ranges. 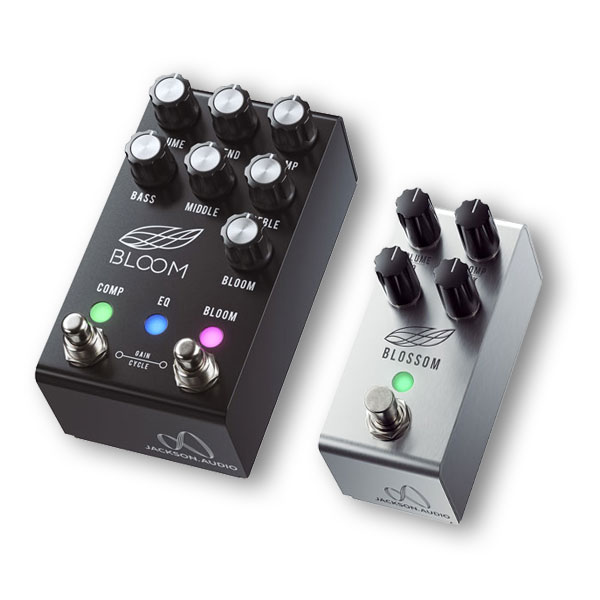 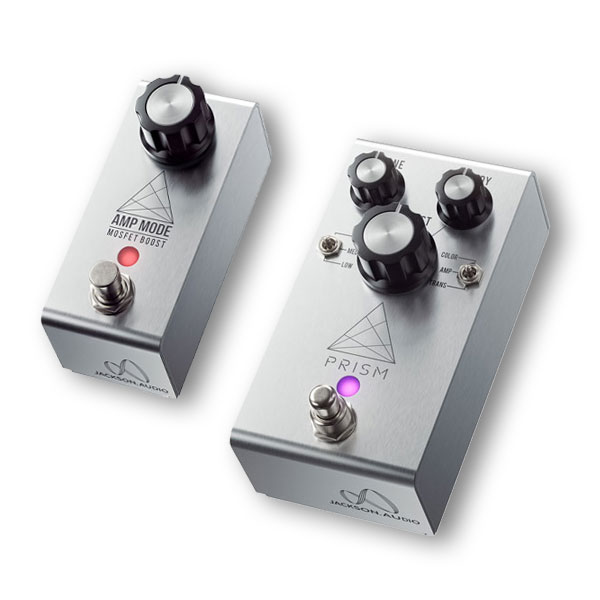 With Jackson Audio’s roots in amplifier design, sublime amp-like boosting and overall tone shaping was the logical step to take for their first product to market.

While the AMP MODE distills the exact same core circuit into a tiny footprint to fit onto any pedalboard with ease.

Either of these pedals can be used as a preamp for your overall signal, a boost to push an overdrive pedal even further into saturation or as a post overdrive boost to clarify and push your guitar forward in the mix.

Audio Distribution Group is proud to be the exclusive distribution partner for Jackson Audio in the United Kingdom, Ireland, Scandinavia (Denmark, Sweden and Norway), Finland, Germany, Austria and Italy .