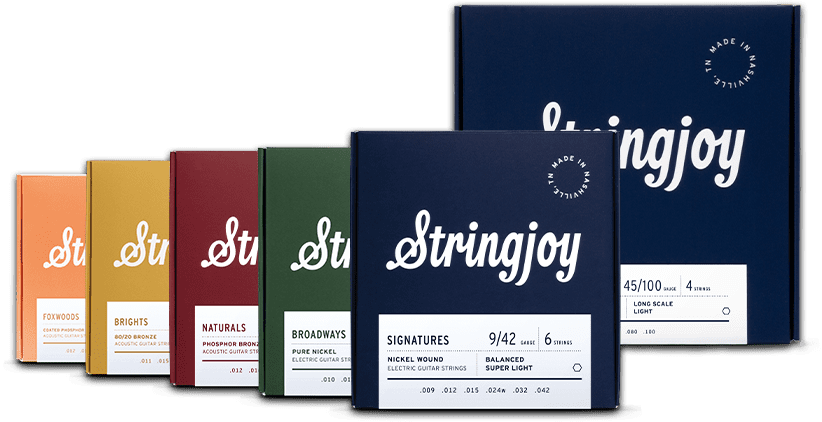 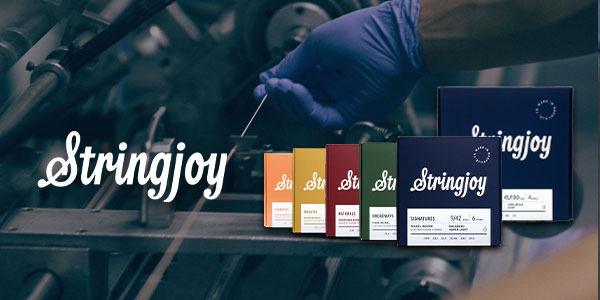 Founded in 2014 in Nashville, Tennessee U.S.A. by Scott Marquart, Stringjoy crafts finest guitar and bass strings from all-American high-quality materials, by hand, one at a time.

After spending some time messing with his own guitar strings, combining sets and gauges to make a set that did what he wanted it to do, Scott started Stringjoy to scratch his own itch – to make the best quality strings accessible to players at all levels.

Although starting small, it didn’t take long for word about the world’s finest guitar strings to spread around and players came rushing into the fold, from metal players wanting a fuller bottom end for dropped tunings, to country players wanting to achieve the perfect twang, to prog and fusion shredders looking for a perfectly balanced set of strings to optimise their technical efficiency.

During their formative years, Stringjoy discovered one major reason that strings had been overlooked as a tone-sculpting tool for so long by many: they just weren’t all that good. As much as players thought of strings as something cheap they could grab off the rack, a lot of manufacturers felt pretty much the same way about them.

As a consequence, Stringjoy rebuilt their manufacturing in Nashville and optimised their process for string performance, not manufacturing speed or labor efficiency, Making a Stringjoy string takes time and it’s hard work. They don’t see their job as to manufacture the cheapest strings, their calling lies in crafting the best of strings. Therefore, Stringjoy strings are designed and made to sound fuller, perform better and last longer than anything else out there.

From their modern sounding, high output Nickel Wound Signatures and vintage-inspired Pure Nickel Broadways electric guitar strings, to the authentic woodiness of their Phosphor Bronze Naturals, present and punchy 80/20 Bronze Brights and seemingly ever-lasting Coated Phosphor Bronze Foxwoods, as well as their smooth and balanced Nickel Wound Bass Signatures bass strings, players are bound to find a string to their taste among their wide variety of sets and gauges.

The combination of better materials and more careful craftsmanship creates a more natural-sounding, longer lasting string, without the tone-deadening effects of string coatings.

Stringjoy Signatures offer a present, focused tone that brings out the true voice of your guitar and the details of your playing style.

Their Modern, reconstructed gauges are aimed at balancing the tension, tone, and feel of the strings across the fretboard and their high-mass winding, leading to higher output, fuller tone, and improved longevity.

All this results in better tuning stability for the life of the string, longer string life and less breakage, when cared for properly as well as smoother, more balanced playability across the neck of the guitar. 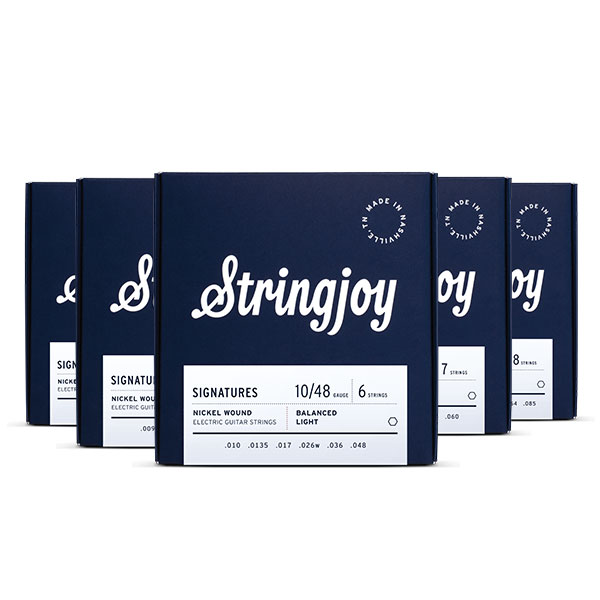 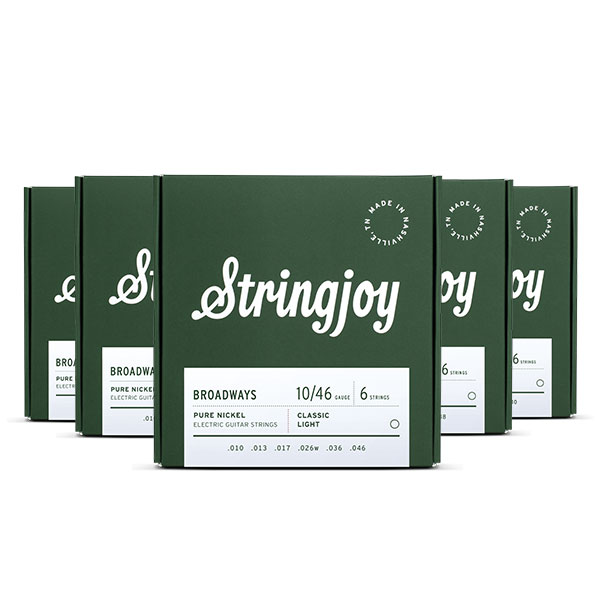 Stringjoy Broadways are their homage to vintage round core, pure nickel guitar strings, but done better. More nickel, more flexibility, and the longest-lasting tone you’ve experienced in a set of electric guitar strings.

Stringjoy took a classic approach to the gauges on our Broadway sets with just a few limited offerings in this line.

If you’ve ever played Pure Nickel strings before, these strings have even more nickel in them than the strings you’ve played in the past. That means more of that rich, full tonal character. It also means more flexibility, since the round core is thinner than it is in other sets. But these don’t sacrifice when it comes to strength or durability either and they hold tune with the best of ’em.

Broadways use a thin but strong round steel core, with a highly-compressed pure nickel over-wrap that gets as much nickel onto each string as possible. This gives you the tone of a much heavier string and the flexibility of a lighter string, with no trade-offs to speak of.

The incredible flexibility of Stringjoy Broadway Pure Nickel wounds means that this set gives you loads of playability and full, warm tonality.

Every string is inspected individually before it goes into your set. If anything is wrong with a string, from the way it’s secured around the ball end, through the entire winding, it doesn’t make the cut.

Giving you a full, woody, natural tonality, Stringjoy Naturals bring out the true voice of your guitar and the details of your playing style. These balanced set strings are great for taming harsh highs on overly bright guitars or accentuating the bottom-end character of larger-bodied guitars.

Also, Naturals offer an extended lifespan, due to the corrosion-inhibiting effects of the phosphorous in phosphor bronze. Once the initial “string zing” wears off and these hit their sweet spot (typically within a day or two), these will keep that “sweet spot” tone for longer.

All that means better tuning stability for the life of the string, a brighter, more pronounced sound from the guitar and longer string life and less breakage, when cared for properly as well as smoother, more balanced playability across the neck of the guitar. 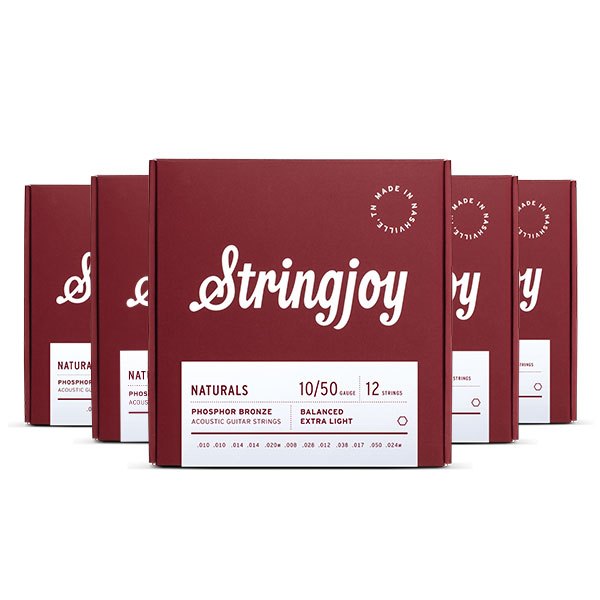 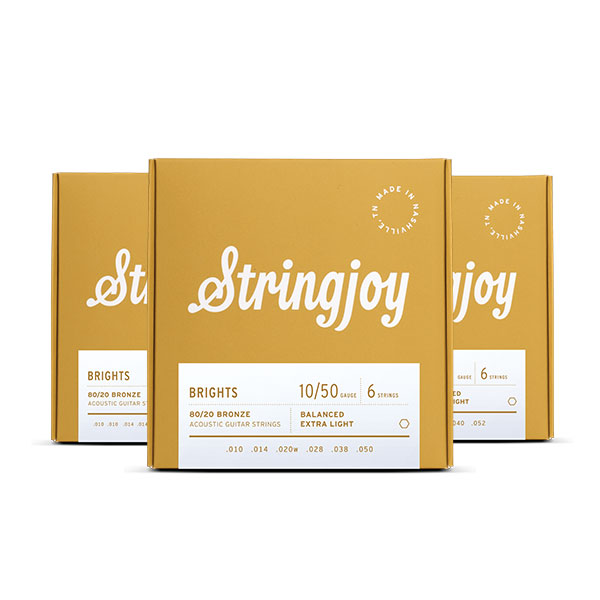 Featuring an 80/20 Bronze alloy these strings give your acoustic guitar the present, punchy, articulate tone it needs to cut through any mix. Equally suited to finger-style and picked techniques, this is the perfect choice for any player that requires a crisp, brilliant top-end, with an equally vibrant low-end. Give your own acoustic the strings it deserves, a set that will make it stand out from the crowd.

They are a brighter-sounding string with a full, rich bottom-end reminiscent of vintage acoustic guitar tones of the 50s and 60s and an extremely resonant set of strings, great for breathing new life into darker acoustic guitars, such as those with mahogany bodies. Brights have a slightly shorter lifespan relative to the phosphor bronze Naturals, as 80/20 Bronze lacks any sort of natural corrosion inhibitor (such as the phosphorous in phosphor bronze), so it can age more quickly.

However, the combination of excellent materials and more careful craftsmanship creates a more resonant string with a fuller tonal range and excellent durability, excellent tuning stability for the life of the string, a brighter, more pronounced sound from the guitar and smoother, more balanced playability across the neck of the guitar.

Foxwoods are the perfect coated phosphor bronze strings for players that love the bright, lively tone of uncoated strings, but want the extra snap and longevity that coating can bring. Pairing an enamel-coated wrap wire with a tinned hexagonal core, Foxwoods typically provide 2-3x longer life and peak brightness compared to our uncoated strings.

Made out of all-American materials, these top-quality enamel-coated Phosphor Bronze alloy strings are wound around a high carbon hexagonal steel core wire.

This creates a more natural-sounding, longer lasting string, without the tone-deadening effects of string coatings.

Offering a snappy, present tone, Stringjoy Foxwoods will cut through any mix and brighten up your tone with a smooth feel, yet reduced finger-noise when compared with Stringjoy’s uncoated strings, as well as having a 2-3x longer life and peak brightness. 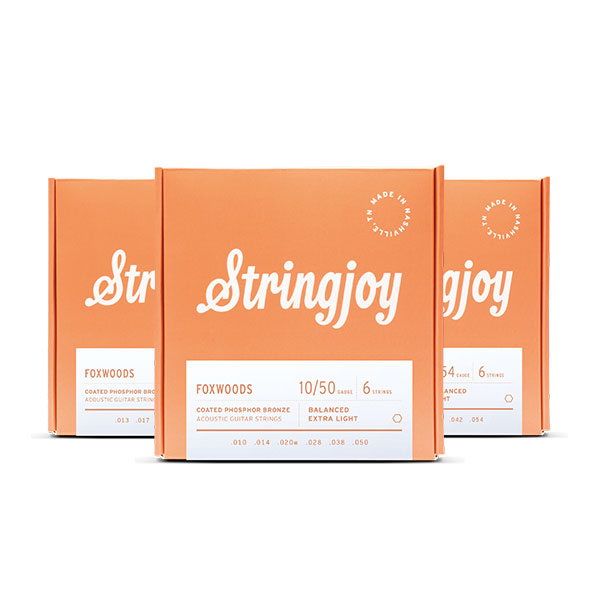 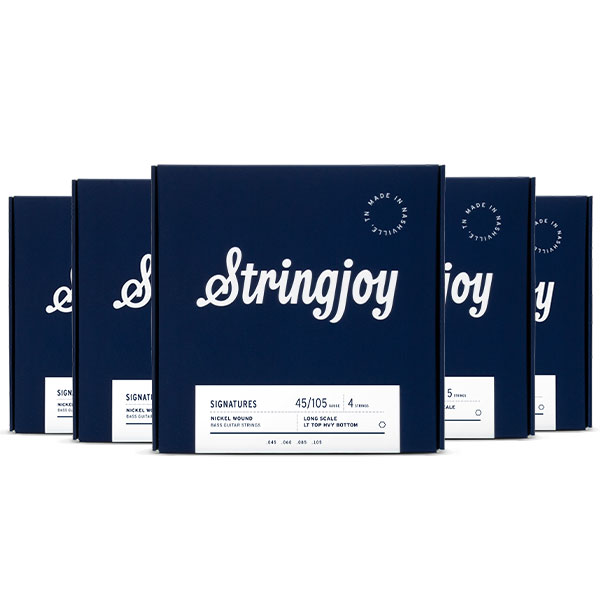 Available for 4, 5 and 6-string basses, Bass signatures offer better tuning stability for the life of the string, longer string life and when cared for properly less breakage. In addition, they provide smoother, more balanced playability across the neck of the bass.