The Ultimate Bass Drive Pedal Just Got An Upgrade

It’s hard to believe that it has only been just a few years since Darkglass Electronics was formed in 2010.

The fledgling company may have not been the most experienced in the industry back then, however they had a secret up their sleeves – the award winning and highly sought after Microtubes B3K.

What started out as a pursuit to make the pedals that could create the tones Darkglass founder Douglas Castro had in his head, quickly morphed into a rapidly growing business, as bass players around the world began to hear about the powerful punchy tones that was coming out of their factory in Helsinki, Finland.

However, it is almost unheard of to have the flagship products of a tech company stay virtually unchanged for almost a decade. So Darkglass thought the time had come to implement some of the engineering tricks they have learned in their journey, to give these much-loved products the upgrade they deserved.

A perfect combination of brutality and clarity, the original Microtubes B3K delivered a sharp and scooped overdrive tone (like a modern tube amplifier) in a really easy to use pedal. Its dead simple control layout was key to the Darkglass initial success. As it is virtually impossible to set it the “wrong way”, the three knobs and toggle switches made it easy to find useful tones while rarely getting something that wasn’t useful and appealing.

However, after being at the top of the field for nearly 7 years, Darkglass thought the time had come to implement some of the engineering tricks they have learned in their relatively short journey and give this much-loved pedal the upgrade it deserved. So, with the Microtubes B3K V2 you get all the features of the original, but now get the added ability to restore the mid-range for a natural character if needed.

The attack switch has now been replaced by the tone knob, giving much more control of the higher harmonic content (3 kHz to 8 kHz). The grunt switch is still present, as you would expect, but this now comes in the form of a mid-boost, giving you a subtle 6dB boost from 300 Hz to 1 kHz. This can help you to cut through a bit more in busy mixes.

There are no rules and no limits, so dig in and unleash your tone.

V2 Technical upgrades:
Fundamentally the Microtubes B3K V2 is the same pedal Darkglass designed nearly a decade ago, aimed to give you a perfect combination of brutality and clarity. You can guarantee that the updated version will deliver defined and powerful saturation in an intuitive format. 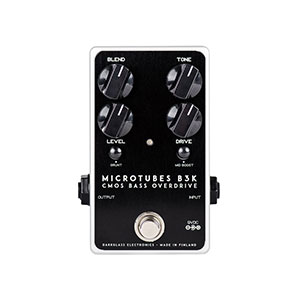 These are the notable changes:

Audio Distribution Group is proud to be to be responsible for distribution in
the UK, Ireland, Italy, Switzerland, Denmark and Greece for Darkglass Electronics.