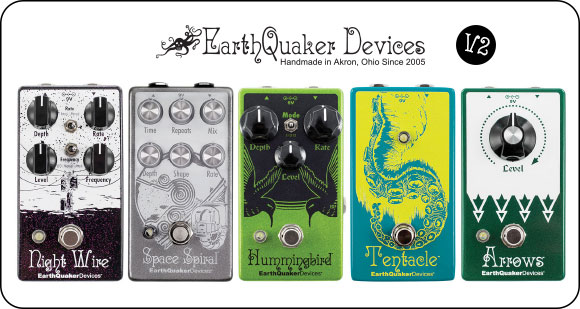 Hummingbird V4, Arrows V2 and Tentacle V2 now feature updated high-quality soft-touch relay switching systems for dead-silent and effortless on-stage operation, along with enhanced long-term durability. Arrows V2 and Tentacle V2 have also received new enclosures with top-mounted I/Os for effortless pedalboard implementation. In addition, the Night Wire V2, Space Spiral V2, Tentacle V2 and Hummingbird V4 have all been equipped with EarthQuaker Devices’ new flexi-switch, which allows players to switch between operating the pedals in classic latch mode or in the new momentary mode. Night Wire V2 has also received a circuit update, which greatly improves its signal-to-noise ratio and has given the pedal even more output and tonal versatility.

In essence, these V2 upgrades are sure to cement and prolong the popularity of these already legendary pedals.

The Night Wire V2 is a feature-rich harmonic tremolo. What is harmonic tremolo? In short, the signal is split into high pass and low pass filters, then modulated with an LFO that is split 180 degrees.

In non-techy terms this means that Night Wire lands in a weird but wonderful place somewhere between a Tremolo, Vibe, Wah and a Phaser, ending up with one of the most magical and mesmerizing sounds a human being will ever hear.

So plug in and let yourself be seduced by the exhilaratingly expressive tones of the Night Wire! 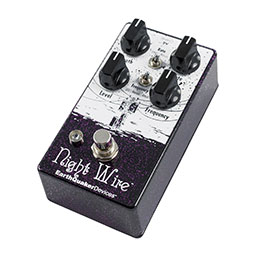 What up, cosmonauts? Welcome to the Space Spiral™V2!

The Space Spiral is a dark and dreamy modulated delay designed to take you across the highways of fantasy. While the delay may be designed around a dawn of digital echo processor, the sound is out of this world, man.

If you are a fan of the dreary echoes produced by old oil can delays or the ethereal sound of a well-loved tape delay, the Space Spiral is totally going to tickle your tone bone. 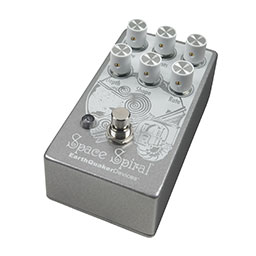 The Hummingbird V4 is a choppy, sawtooth tremolo modeled on the vintage repeat percussion unit and similar to those found in old Valco and Vox amplifiers and is capable of producing everything from classic 50s style shimmering tremolo to a synthy, delay-like chop that turns your signal into a burst of short pings and on through to near ring modulation speeds.

To make things even more fun and expressive, the new Flexi-Switch allows you to use the pedal in momentary mode for sudden accentuations of parts with slow subtle airwaves or bursts of aggressive and fast choppy synth-like trem tones. 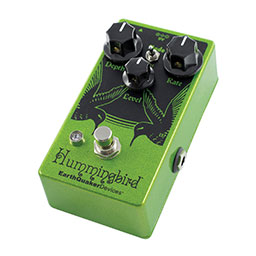 The Tentacle V2 is a classic analog octave up effect. It is the very same octave from our beloved Hoof Reaper pedal. We got so many requests to make this a stand-alone unit that we just had to make it a reality  and now you can now add an excellent, swelling octave up to anything your heart desires!

Now, with the new V2 Flexi-Switch you can momentarily trigger this amazing octave, enabling you to make certain melodies and riffs stand out as you suddenly drench them in the dynamic stinging and synth-like tones of the Tentacle. For standard latching operation, tap the footswitch once to activate the effect and then tap again to bypass. For momentary operation, hold the footswitch down for as long as you’d like to use the effect. Once you release the switch the effect will be bypassed. 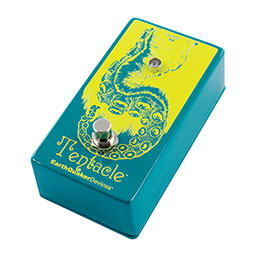 The Arrows V2 is an all-discrete tone sculpting preamp booster and was designed with the intention of adding an additional channel of gain to all your dirt pedals, as well as brightening up neck pickups. It boosts midrange, tightens up the low end and makes the top end shine while adding some push to drive your dirt into blooming sustain with excellent harmonics.

Its simple interface is no nonsense; a single control that will either boost or cut your signal. While the new V2 enclosure, with its top-mounted jacks, make fitting the pedal even into the most crowded pedal board a breeze. Use the Arrows V2 to remove the muck from bass heavy fuzz pedals, push light overdrives into higher gains than you thought possible or even on its own to make your signal really pop with more pizazz. 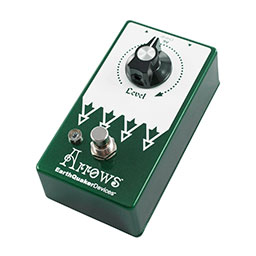