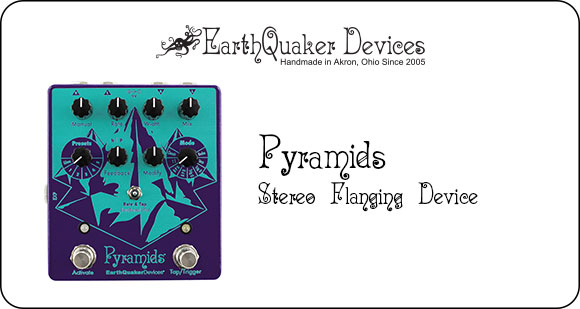 Built upon the same proprietary DSP architecture as the smash-hit Avalanche Run, Pyramids is a Stereo Flanging Device with five user-definable presets (a first for any EarthQuaker Devices pedal!), eight flanger modes, tap tempo, tap subdivision via the Rate & Tap mini-toggle, a multifunction Modify control, positive and negative feedback, and a variable Mix control, which is something you don’t see on a flanger every day. 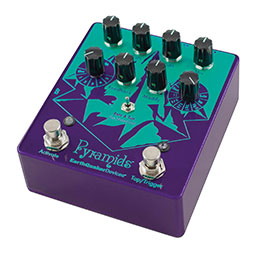 To accommodate any input source, Pyramids includes stereo input and outputs which allow for a variety of routing options onstage or in the studio.
Routing possibilities include: Mono in / Mono out – Mono in / Stereo out – Stereo in / Stereo out. In addition, Pyramids’ Trigger Up/Down modes allow for Side Chain Flanging, in which an external control source (drum machine, sequencer, CV) may be used to trigger the flanger while you play another instrument! In this configuration, the primary instrument is routed through the Right Input and Right Output while the control source is patched into the Left Input. Also, Pyramids’ Manual control may be modulated in all modes via expression pedal (sold separately).