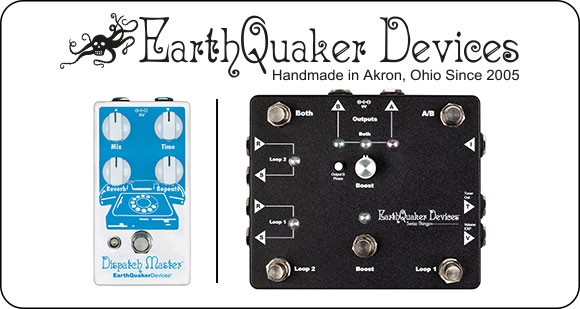 Swiss Things really is a problem solver and will help to tie together many pedalboards out there, while the Dispatch Master V3 brings improvements to EQD’s top-selling product by updating the venerable delay/reverb pedal to the very latest spec with their FlexSwitch™ Technology.

EarthQuaker Devices’ Swiss Things is an all-in-one pedalboard reconciliation solution designed to really tie your rig together, without resorting to some confusing loop-switching contraption bigger than a meatball party sub (that eats up the entire bottom row of your board and kind-of-but-not-quite does what you need it to do).

Swiss Things combines two true-bypass Flexi-Switch™ enabled effects loops, a Flexi-Switch™ AB-Y box with transformer isolation between outputs, a buffered tuner output, 20dB of clean boost, an expression pedal output for volume control, and a quiet, high headroom output buffer into a compact pedalboard-friendly signal routing junction box that lives at the top-right corner of your pedalboard and really ties your rig together without any signal loss.

The two effects loops (labelled Loop 1 and Loop 2) come equipped with EarthQuaker Devices’ proprietary Flexi-Switch™ Technology which allows latching- and/or momentary-style switching to be used with any effects pedal on the market. Loop 1 is unbuffered for use with fuzz, overdrive, distortion, boost, vintage pedals, or anything else with low input impedance and requires direct interaction with your pickups. Loop 2 is buffered and is intended for use with time-based and modulation effects.

A buffered tuner output removes your tuner from the signal chain, allowing users to stay in tune without tone loss. The Volume EXP jack allows for expression pedal control of volume without volume pedal-related tone-suck and is located after the “dirt” effects loop (Loop 1) to change levels without affecting gain.

Swiss Things also includes a Flexi-Switch™ enabled AB-Y box with transformer isolation between outputs and a phase switch, 20dB of clean boost with adjustable gain, and a quiet, high headroom output buffer. It all adds up to a compact, pedalboard-friendly signal routing junction box that lives at the top-right corner of a pedalboard and ties the rig together without any signal loss.

An all-time EarthQuaker Devices favourite just got even better!

The Dispatch Master’s hi-fi delay and reverb sounds and intuitive control set have made it a staple of pro pedalboards around the globe. It features a dynamic reverb that goes from natural and roomy to cavernous and deep, up to 1.5 seconds of delay time, and a dialled-in delay Repeats control delivering anything between a single echo to infinite repeats without unpleasant digital artefacts or runaway self-oscillation.

Its simplicity has made it a popular “always on” effect for players who want to add a touch of ambience and slapback to their clean tone, and its lush ambient sounds make it a perfect fit for modern and experimental players. 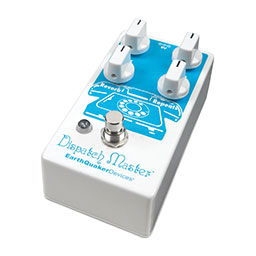