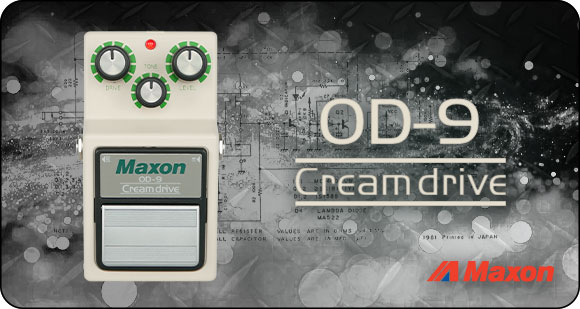 The Cream of the crop! 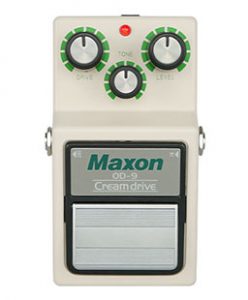 Following the success of the OD-9 Blackdrive released in 2021, the limited-edition OD-9 Creamdrive made exclusively for the European market, provides that same world-famous, unique gain and natural overdrive of the original Tube Screamer® design, but in a classy semi-gloss cream enclosure. Still 100% made in Japan, the pedal features entirely analog circuity equipped with the celebrated JRC4558D op-amp, to deliver its unique smooth tube-like natural overdrive, all without sacrificing your guitar tone. The pedal can also be used as a clean boost, without altering your signal.

Get one while you can! 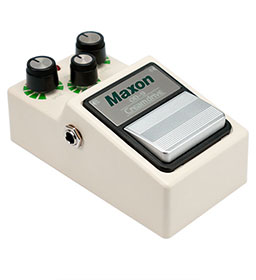 For over 50 years, Maxon has been renowned for its effect pedals ever since Maxon’s parent company Nisshin Onpa started designing them in 1969. However, their products were not marketed under their own brand originally outside of Japan and were sold worldwide under other well-known brand names (OEM), such as Ibanez™. Eventually, the commercial relationship between the two firms grew stronger in the 1970s, to a point where Hoshino Gakki (owner of the Ibanez™ brand) became Nisshin Onpa’s most important client 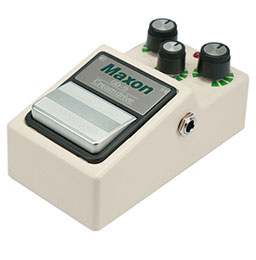 In 1979 Nisshin Onpa developed the legendary Ibanez™ Tube Screamer TS-808 overdrive, while also selling it under their own brand in Japan as the Maxon OD-808 Overdrive. This pedal became a worldwide success and was seen on pedal boards everywhere. Stevie Ray Vaughan used two of them in series on his board, plus other famous guitarists like Gary Moore, Eric Clapton, Santana, Rory Gallagher, Steve Stevens and Marty Friedman, just to mention a few, were using it too.

Although the OD808 may have been the first overdrive circuit of its kind, it was the TS-9/OD-9 that cemented this sound in the history of Rock & Roll guitar with more gain and bite. When Maxon re-released the pedal in the 21st century, it was a true-to-spec reissue of the legendary 1980s OD-9/TS-9 JRC4558D circuit. They also improved the output section in order to lower background noise, plus added True-Bypass switching giving clean, uncoloured tones for when the pedal is off.

Audio Distribution Group is proud be to be responsible for distribution in the UK, Ireland, Denmark, Norway, Sweden and Italy for Maxon