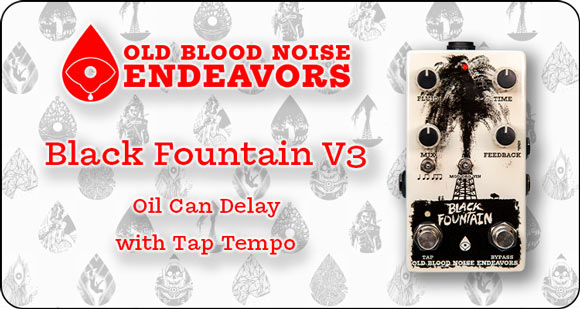 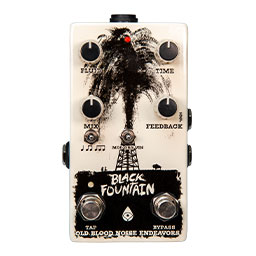 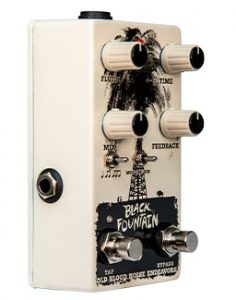 The Black Fountain was the pedal that started it all for Old Blood Noise Endeavors. Just like the company has rapidly evolved over the years, it’s time for their firstborn to take a step up the evolutionary pedal ladder.

In the V3, first the delay time has been greatly expanded, which now almost reaches a full second in Modern and Vintage modes. These modes emulate the echoes of units like the Fender Echo-Reverb, Tel Ray Model 10 and Morley EDL, but the Black Fountain lets you go far beyond the echo potential of those classic units.

With your standard delay controls like Time, Feedback and Mix and the unique Fluid control, which introduces wobbly modulation into the echoes, you can sculpt anything from vintage slapbacks, long sonar-like ambient trails, warbly fluctuating textures and short reverb-like sounds. You can even conjure gritty lo-fi tape modulation and saturation when using Vintage mode, since it’s slightly dirtier and grainer than Modern mode. 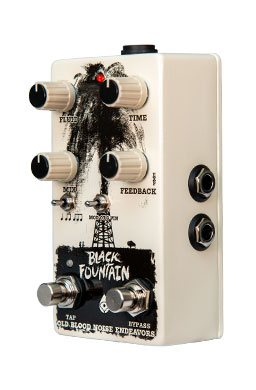 On the other hand, Organ mode was designed to emulate short-delay oil-can units like the Tel-Ray Deluxe Organ Tone and Fender Dimension IV, hence it sports a fixed delay time of 211 ms and gives you greater control to sculpt the modulation. In this mode, Fluid controls the modulation rate, Time sets the modulation depth and Feedback controls the length of the trail.

With the addition of Tap Tempo and three different subdivision modes to the pedal, it’s become super easy to keep those Modern and Vintage echoes rolling tightly in time with the music. While in Organ Mode, Tap Tempo allows you to instantly set the speed of the modulation on the fly. But the fun doesn’t stop there!

Simply press and hold the Tap Tempo switch and hear your echoes stretch out into a warm sonic blanket of awesomeness, as the delay feedback momentarily gets maxed out.  Great for ambient pads, reverb-like swells, sound-on-sound textures and delay drones.

Finally, the expression input has become super clever, as you can now program the heel and toe positions of your sweep. This lets you minutely change the position of either the Time, Feedback knob or both at the same time, effectively letting you jump between two perfectly preset delay tones, just by rocking your foot.