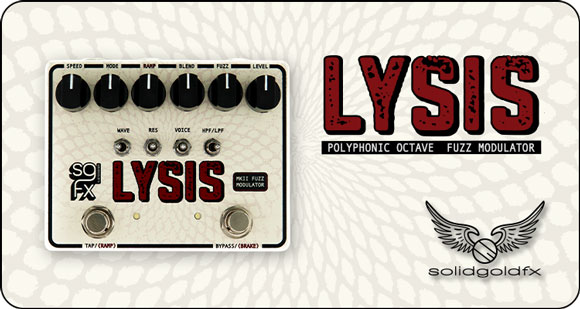 The LYSIS MKII is finally here! Is it a fuzz pedal, an octave, a sweeping filter, some kind of synth machine? YES!!

Building on the foundation of SGFX’s original LYSIS design, the LYSIS MKII pushes the envelope even further with a number of new features and functionality that helps to increase player interaction and versatility.

Bursting with possibilities, LYSIS MKII is designed to meld the world of stringed instruments with that of synths. The LYSIS MKII applies thick, resonant filters, multiple polyphonic voicings and sweeping LFO’s, all drenched in an analog square-wave fuzz to your instrument of choice. 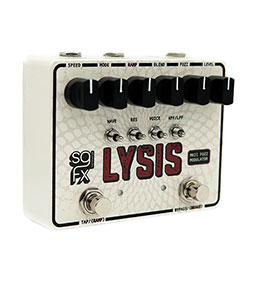 At the core of the LYSIS MKII is a discrete FET preamp and high-gain fuzz circuit. This feeds into SGFX’s digital polyphonic voice and filter generator, then back into a discrete transistor output stage, offering the best of both analog and digital signal processing.

While the high-pass and low-pass filters carry over from the previous generation, they are now controlled by SGFX’s new tap tempo LFO. This is now loaded with 33 different triangle, sine and square waveshapes coupled with 3 preset resonance settings for your choice of soft modulation or heavy, rhythmic sweeps.

The Voice selector has been expanded to include the previous octave down setting, as well as a new octave down/octave up voicing and SGFX’s Super Power Chord featuring octave down/fifth pitch shifting.

Combined with a feature-rich, yet easy-to-use control set, the LYSIS MKII quickly becomes an extension of your instrument and an inspirational toolbox. There’s nothing left to do but to plug in and let the LYSIS MKII sweep you off to synth/fuzz nirvana and enjoy punishing octave-down fuzz, rich, gooey filter sweeps or anything in between.

Audio Distribution Group is proud to be the UK and European distributor for SolidGoldFX.