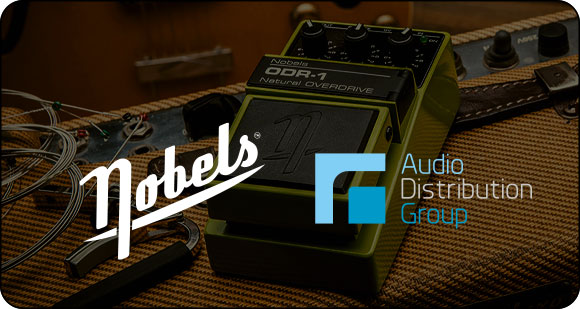 We are extremely happy to announce that Audio Distribution Group has been appointed as distributor for all Nobels products across Europe (excl. Germany) and in the United Kingdom.

NOBELS was originally established in Hamburg, Germany in 1983, becoming famous for developing many effect pedals, switching units and headphone amplifiers for their own brand as well as for other industry stalwarts such as Fender, Washburn and Guild, to name but a few.

The top selling Nobels ODR-1 Natural Overdrive has been the first choice and secret weapon of many guitarists worldwide for over 30 years. In fact, this pedal has developed an almost cult like following since its first release and has been on heard on countless records globally. When the original circuit was developed back in the 1980s, several overdrives on the market had what many people describe as a ‘nasal’ tone, but Nobels worked hard on creating a very ‘open’ sounding pedal that works with the guitarist and their amplifier. The result was the ODR-1, German engineering at its finest, with stacks of resistors and capacitors forming very precise filters and signal shaping, all helping to provide a pedal that responds to player’s dynamics, while adding texture to tone in a very natural, musical way and allowing the character of the instrument to be fully retained.

Stepping forward to 2020, Nobels is updating this classic pedal today by releasing a new model ODR-1BC. Answering to numerous requests from the pedal community and professional players worldwide, Nobels have added the option of an internal Bass Cut switch and increased the internal circuitry internal power circuitry to allow for 9-18 V capability to provide additional headroom. These new features haven’t altered the fundamental tone and vibe of the original, but have increased the versatility of the pedal massively for modern rigs.

Nobels CEO Bernhard Kurzke said, “Our direct distribution concept in our home country of Germany last year created great feedback with local dealers and musicians and an unexpected boost in sales. However, to best serve the demand outside Germany we have agreed to ADG’s approach. This strong distribution partner is very experienced with mainstream and boutique product and understands the pedal market extremely well. This cooperation will give us more time for our upgrades and new innovative models”.

Bruce Davidson, ADG’s COO added, “ADG is more than delighted to work with Bernhard and his team with the excellent Nobels line of products. We’ve been fans of the brand and products for many years and look forward to a long and fruitful relationship in the years to come”.