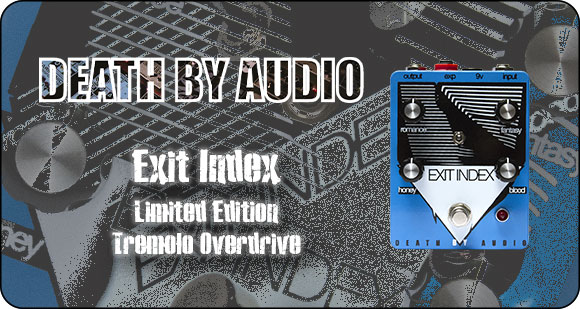 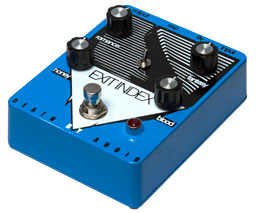 Exit Index is an all-analog warped tremolo and tube-style overdrive that responds to input levels dynamically. Tremolo is cool but usually safe. This pedal Death By Audio pushes tremolo somewhere strange. Violent, Leslie-like thump. Re- verse delay-like sounds. Ambient, psychedelic swirls with minute varia- tions in the tempo of the LFO. Hit it hard and hear the tremolo only in the decay. Play softer and let the whole sound get affected. Or turn up the Blood knob and let things get really strange and aggressive. In addition, it has expression in and internally works off of 18v for extra headroom while only requiring 9v to be powered.

Exit Index is limited to a run of 157, after the catalog number of the Grooms album of the same name, coming out this Friday, October 20. It was designed by Travis Johnson from Grooms, one of the owners of Death by Audio. Here’s what he says:

“I wanted to make a tremolo pedal to come out with the Exit Index because, almost randomly, there is a lot of tremolo used on it. I’ve barely used tremolo before but came across an old Fender Princeton amp with tremolo, given to me for free, and decided to record most of the guitars with it. The tremolo on it is noisy and interesting and I used it a lot but it made me think about how I hadn’t heard anything all that interesting done in a trem pedal in a while. It’s one of the oldest, simplest effects. So I decided to try and make something that involves tremolo but really pushes it in weird ways. I like weird, noisy, idiosyncratic effects, so I decided to use the noisiness of that Fender amp and give it more violence, almost like a Leslie, with lots of aggression and thump that can, but doesn’t have to, mangle the signal. It can make really angelic, pretty sounds and alien, harsh ones too.”

Audio Distribution Group is proud be to be responsible for distribution in the UK, Ireland, Norway, Sweden and Italy for Death By Audio