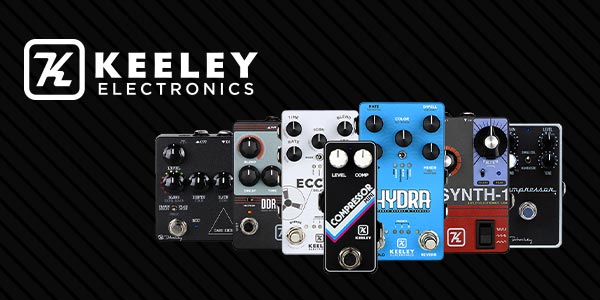 that push right into the future

It’s hard to imagine where the pedal world would be today without Robert Keeley and his immense contribution to our industry.

Since 2001, Robert (AKA the Godfather of the boutique pedal movement) has been building effects pedals out of Edmond, Oklahoma, where he quickly solidified his name with his now legendary Keeley Compressor.

Keeley Electronics is now synonymous with high-quality effects, which combined with their adventurous spirit have seen them create some of the most iconic pedals in the industry, perfectly bridging the gap between classic and modern.

From modernised and refined takes on classic drives, to an unmatched selection of studio-quality compressors, the wild selection of powerful modulation and ambience devices and all the way to their signature workstations that perfectly capture the tones of the greats, the ever-expanding Keeley selection is a true treasure chest for blues players, bassists, classic rockers and experimental tone chasers alike.

However, with the recent venture into high-powered DSP with the ECCOS Delay/Looper and the HYDRA Stereo Reverb & Tremolo, Keeley prove once again that they are one of the true pedal pioneers.

In celebration of their 20th Anniversary Keeley Electronics have released the next generation of Keeley Compression, the Keeley Compressor Mini, which harkens back to their roots in pedalboard compression.

The HALO – Andy Timmons Signature Dual Echo is much more than a one-trick pony – it is a compact true-stereo delay workstation that comes loaded with Andy Timmons’ mysterious “Halo” effect. 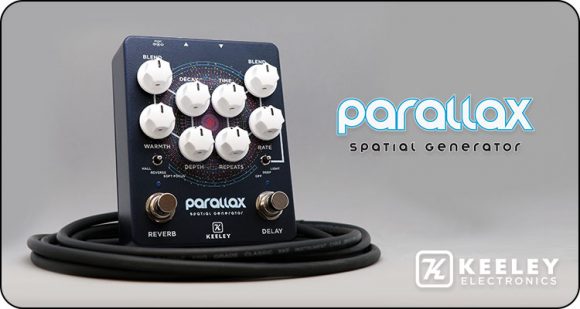 January 19, 2023
Keeley Electronics ParallaxSpatial GeneratorThe Parallax offers the delay side of the legendary Caverns paired with unique Shoegaze inspired reverbs of the Realizer in one pedalboard friendly enclosure.On one side of ...
Read More 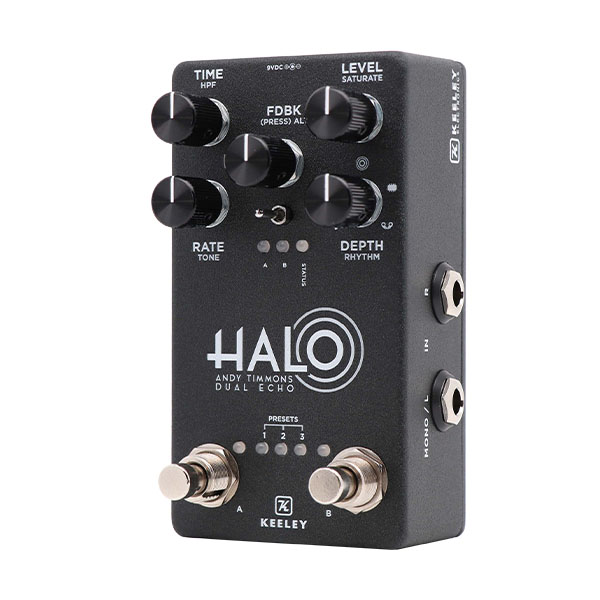 Andy Timmons’ mysterious sounding “Halo” effect is a modulated dual echo sound that has long been kept a secret by the tone wizard himself.  Andy spent decades combining and crafting the sounds you can now get from the HALO. Notes from the HALO dance rhythmically, almost creating a reverb diffusion.  Those notes are held together with tape-style effects like modulation, saturation and compression. The results are stunning!

The pedal comes loaded with his signature delay tone and you can program your own sounds and save them as presets. Easily bounce between Side A and B on the fly, essentially giving you two delay pedals in one. In addition to Andy’s signature “Halo” sound, there are numerous other rhythmic delays including: quarter note, dotted 8th, stereo rack mount analog delay, and a vintage multi-head tape echo. Stunning stereo and pristine sound quality are further enhanced with controls for saturation, tone, and shelving filters that give you the ultimate delay pedal.

Think of HALO as two delay pedals that work in tandem, letting you switch between your main delay (side A) and an alternative (side B). With up to 1500 ms of available delay, set sides A and B for different delay times, then simply foot switch between the two. Keeley’s Smart Stomp System allows you to press and hold either stomp switch to engage tap tempo mode. Press and hold the alternate stomp switch for infinite repeat/hold.

Each Preset bank gives you 2 delays settings for a total of 8 user-storable effects. Use the Rhythm control to select between different echoes like HALO, Analog, Tape, Quarter and Dotted Eighth.

HALO’s Saturate control adds tape compression texture to your tone. The Tone and High Pass Filter controls your overall delay shape and mix. The Rhythm Mode selector delivers 5 delay types, including Andy’s unique “Halo” sound. Set the Time and Feedback controls low, and you can open up a world of ambient chorus and flanger effects.

Run the HALO in stereo for incredible true-stereo imaging or save your favorite combination of settings as a preset and the HALO becomes an incredibly compact multi-effect workstation!

The next generation of Keeley Compression 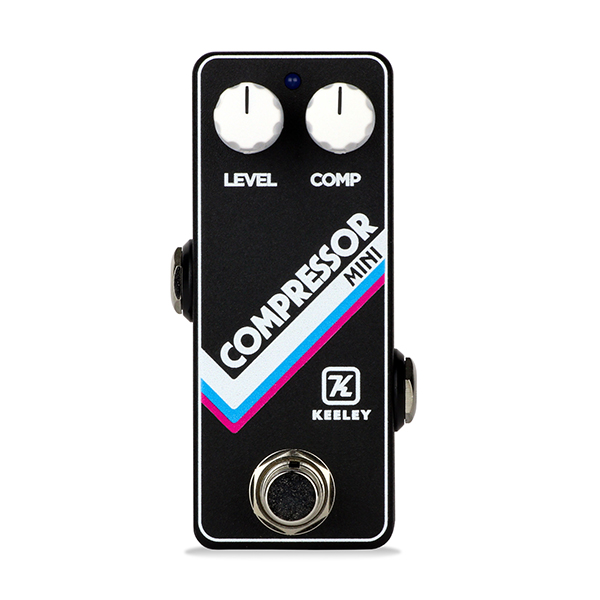 An all-new transient release time is set to make both single coils or humbuckers sound lively and expressive.

The Compressor Mini’s pre-amp tone is legendary; pushing both pedals and amplifiers to their greatest potential.

With any style of guitar, playing live or at the recording desk, the Compressor Mini is your secret weapon. Keeley have done the math for you, this is the new calculus for great tone.

Keeley Sustain and Transparency – 20 Years Worth of Toneful Compression.
Plug into the Keeley Electronics Compressor Mini, feel inspired to play and sound your best. 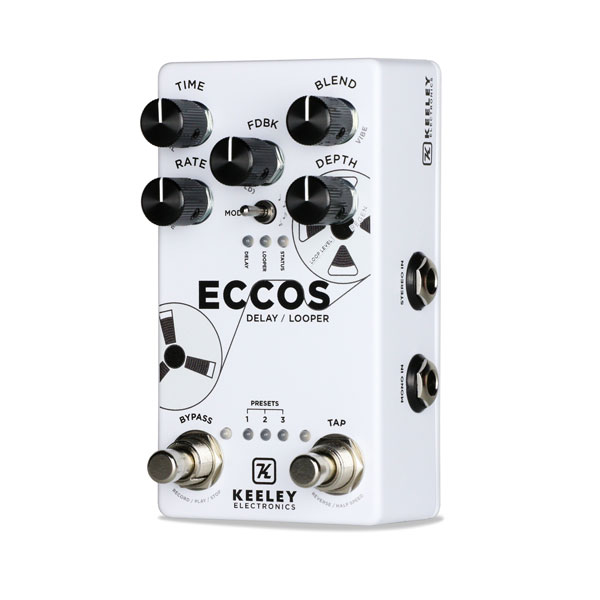 ECCOS is Keeley Electronics first venture into high-powered Digital Signal Processing and after spending almost 4 years customizing and meticulously refining their Dream DSP platform, they’ve managed to create nothing short of a delay and looper masterpiece.

Sporting up to 1.5 seconds of beautiful tape-flanged and vibrato-modulated stereo tape delays, ECCOS will create everything from classic vintage slapbacks to worlds of modulated ping-ponging dreamscapes.

But that’s not all. ECCOS can also be used as a full-blown stereo looper with creative features such as Reverse, Half-Speed and One-Shot, making this compact pedal a true performance powerhouse.

And with expression control, remote bypass, 3 presets, analog-dry-through, kill-dry and a ridiculously low power-draw at only 115mA, this pedal is sure to add immense flexibility and gorgeous sounds to any rig. 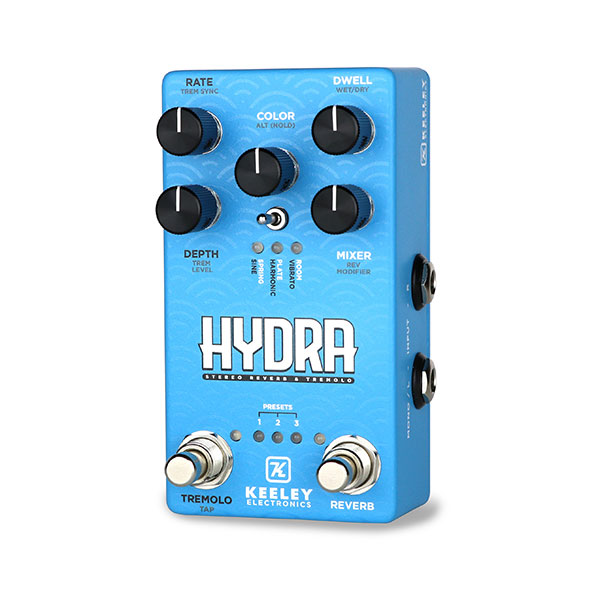 Combining both high-fidelity Reverb and Tremolo, the Keeley Electronics HYDRA Stereo Reverb & Tremolo adds space and dimension to your guitar, bass or synth. After completing the powerful, versatile and stellar ECCOS delay and looper, the Keeley Electronics team set out to craft the perfect companion pedal and with this feature-rich little blue box, they have well and truly accomplished exactly that and so much more.

Featuring gorgeous Spring, Plate and Room reverb algorithms, plus a tap-tempo enabled Harmonic, Vibrato and Sine Wave Tremolo – are all accessible at the press of a button – HYDRA will add space and dimension to any instrument.

To alter the response of this killer Tremolo/Reverb combination, the effects order can be easily changed. In addition, the HYDRA’s Alt Controls let you access in-depth parameters to shape the character of both sound engines. Plus, Hydra even offers an Infinite Reverb Trail! With expression control, remote bypass, 3 presets, analog-dry-through, kill-dry and a ridiculously low power-draw, this pedal is sure to add immense flexibility and gorgeous sounds to any rig. 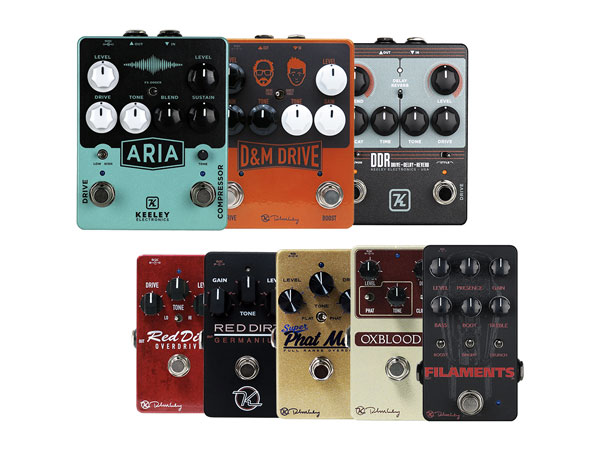 We know the world is full a good drive pedals, but you haven’t really lived until you’ve played through one of the heavenly refined Keeley drive and distortion pedals.

Hear the Tubescreamer perfected in the Red Dirt Overdrive and Red Dirt Germanium, bathe your tone in flawless bluesy crunch with the Super Phat Mod or Oxblood, kick things into punchy and precise high-gain with the Filaments or El Dorado or add divine drive tones along with powerful flexibility to your board with Keeley’s dual combo pedals such as the D&M Drive, DDR or Aria.

Your tone will soar like never before through one of these beautiful dirt devices.

Keeley really cut their teeth on compressors in the beginning of their pedal journey and now boast an impressive collection of industry leading devices to help level out your sound.

From the now legendary classic comp tones and sweet sustain of the Compressor+, the extreme studio-style clarity of the compact GC-2 and Bassist Limiting Amplifier to the in-depth control and precision of the Compressor Pro.

Their latest release the Compressor Mini is designed to make the magic of Manhattan-style compression simple and easy to use with a pedalboard-friendly footprint.

Your tone will always be perfectly balanced with Keeley onboard. 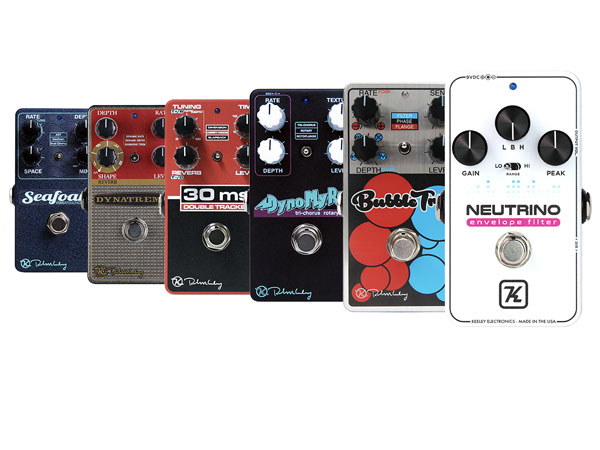 Modulation is that secret sauce you pour on your tone when you want it to stand out with authority and Keeley truly have some of the most spellbinding filters and multi-modulators out there.

Whether you’re going for alien modulated landscapes, special fx or just a touch of pristine chorus for width and depth, Keeley’s impressive modulators are sure to make you feel all bubbly on the inside.

Whether you’re looking to channel the tone of the greats or make your own mark on the music landscape, then the Keeley Workstations are the perfect tools for the job.

From Gilmour’s iconic soaring lead tones and melodic modulation sounds in the Dark Side, to the reverberating walls of shoegaze sound in the Loomer or the legendary Hendrix fuzz and vibe tones in the Monterey, the sound of guitar giants is just a stomp away.

While the myriad of modulation, delay and drive sounds in the SuperMod, Delay and Tone Workstations are perfect for musicians who require unprecedented versatility and soundscaping abilities at their feet.

Your rig is simply sure to take on new creative life with the amazing Keeley Workstations at the center of it all. 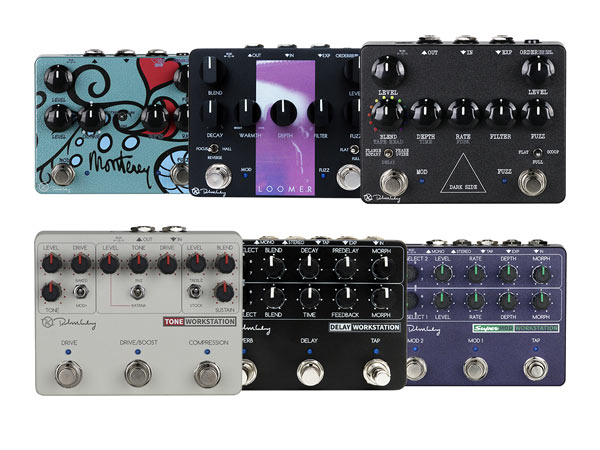 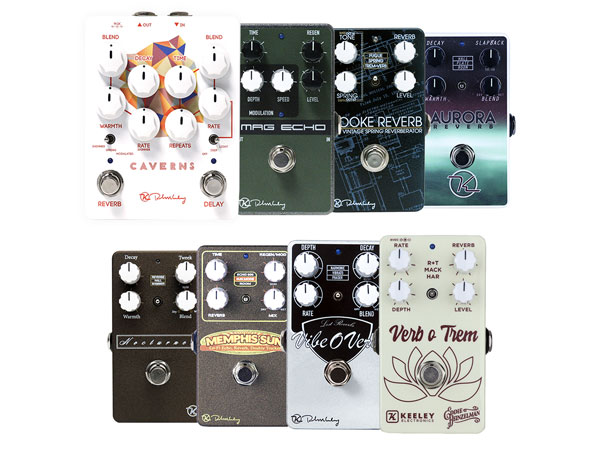 add ambience to your rig

No pedalboard is complete without a touch of ambience at the end to add life and dimension to it all and Keeley have managed to carve a true niche for themselves here, with some of the most unique reverbs and delays currently on the market.

Whether you’re on the hunt for classic subtle delays and reverbs or out-of-this-world texture tools, then Keeley got the goods.

Audio Distribution Group is proud to be the distributor for Keeley Electronics in the UK, Ireland, Iceland, Greece, Finland, Spain, Portugal and Scandinavia (Denmark, Norway and Sweden).